Since 2003 Monsoon Tours has been organising birdwatching tours in Cambodia. The first tours had been organised in co-operation with WCS. WCS has contributed to the development of a local infrastructure for birdwacthing tours in different provinces of Cambodia. The information below is a WCS summary of birdwatching sites, which can be accessed in Cambodia today. Monsoon Tours can offer visits to these sites on individual requests. 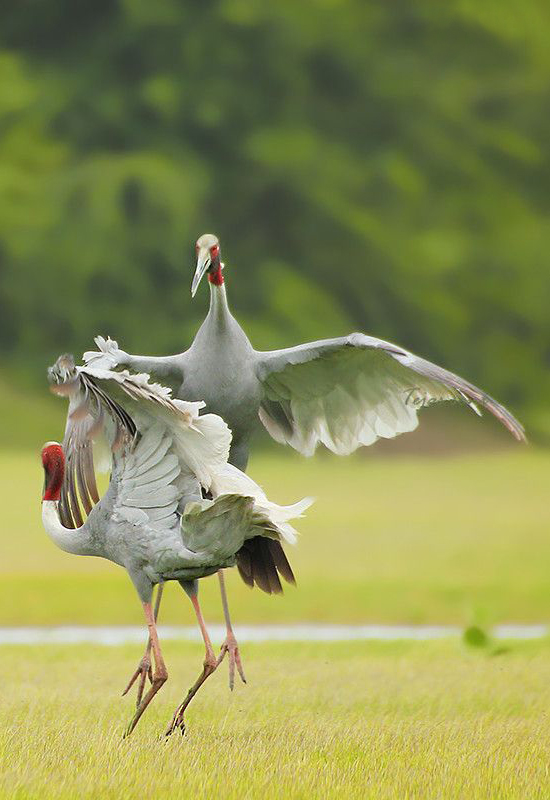 Originating as a man-made irrigation and water storage reservoir rebuilt in 1976 by slave labour during the Khmer Rouge Regime on the historical Angkorian Highway, the reservoir now harbors a unique wetland associated with grassland, dipterocarp forests and paddy fields.

Aside from being a staging ground for more than 300 Sarus Crane in the dry (non-breeding) season, more than 200 species of other birds occur here, of which 18 have been classified as globally or near globally threatened. This is also one of the handful of sites in Cambodia where the endangered Eld’s Deer can be seen.

The best time to see the Sarus Crane is from February to May though an abundance of bird species can be viewed all year. 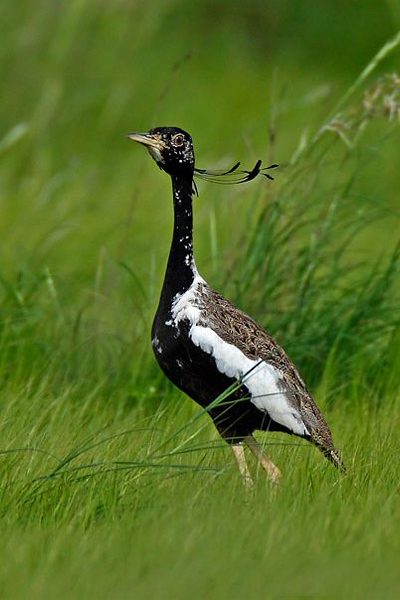 Designated Integrated Farming and Biodiversity Areas, the seasonally flooded grasslands of Kompong Thom and Siem Reap harbor the largest known population of Bengal Florican in Cambodia (and likely the world). There are several sites we visit that comprise important non-breeding grounds for many large water birds, such as the Greater Adjutant, Painted Stork, and Sarus Crane. Also found in this area is potentially the largest single concentration of over wintering Manchurian Reed Warblers.The grasslands are a day-trip from Siem Reap, or can be seen as a half-day stop on the way to Tmatboey.

Prek Toal is one of the three core areas in the Tonle Sap Biosphere Reserve. Situated in Battambang Province the village of Prek Toal lies at the mouth of the Sangke River. The core reserve is 21000 hectares located within Fishing Lot Number 2, the largest and most productive in the Tonle Sap Lake. The sanctuary harbours seven species of water birds of global significance: Spot billed Pelican, Milky Stork, Painted Stork, Lesser Adjutant, Greater Adjutant, Black headed Ibis and Oriental Darter.

The Prek Toal area consists of seasonally inundated freshwater swamp forest with a high botanical diversity. Short tree shrub lands make up most of the landscape, forming a dense under story with scattered large trees, which form the vital nesting ground for large water birds. Prek Toal is unmatched throughout South East Asia for the number and populations of endangered water birds it supports through the dry season. Large flocks of cormorants, storks and pelicans are almost guaranteed from January to May, along with herons, egrets and terns.

Prek Toal is visited as a day trip from Siem Reap. 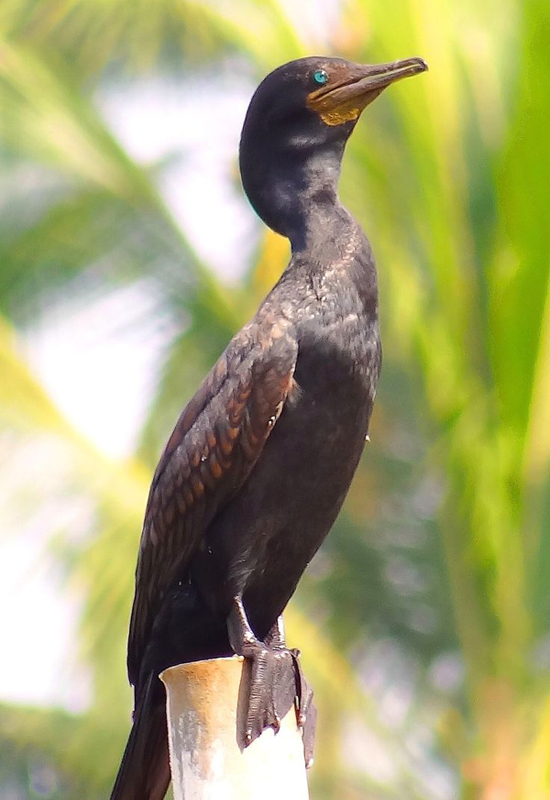 Tmatboey is an isolated village located in Kulen Promtep Wildlife Sanctuary in the Northern Plains of Cambodia. It is the site of a unique community ecotourism project established by the Ministry of Environment and the Wildlife Conservation Society’s Cambodia Program. Access to this remote site is coordinated exclusively through SVC. The Tmatboey Ibis Project aims to directly link bird-watching tourism, bird conservation and community development. The site supports globally important breeding populations of two critically endangered Ibis species: the Giant Ibis – a near-mythical species for all bird-watchers, naturalists and conservationists – and the White-shouldered Ibis, in the only known nesting site for this species.

A conservation contribution is levied on each visitor, which is used for infrastructure improvements and other development projects as part of the agreement with WCS to conserve wildlife and maintain natural habitats.

A typical trip to Tmatboey takes 4 days and 3 nights. The best time to see the White-shouldered Ibis is January to March, and the Giant Ibis from January to April. The success of the project can be seen in the increased numbers of breeding pairs and individual White shouldered Ibis, see chart.

Tmatboey is typically a 3 night trip from Siem Reap usually as part of an extended itinerary that takes in the other Preah Vihear sites. The Angkorian temples of Beng Melea and Koh Ker can be visited on route. 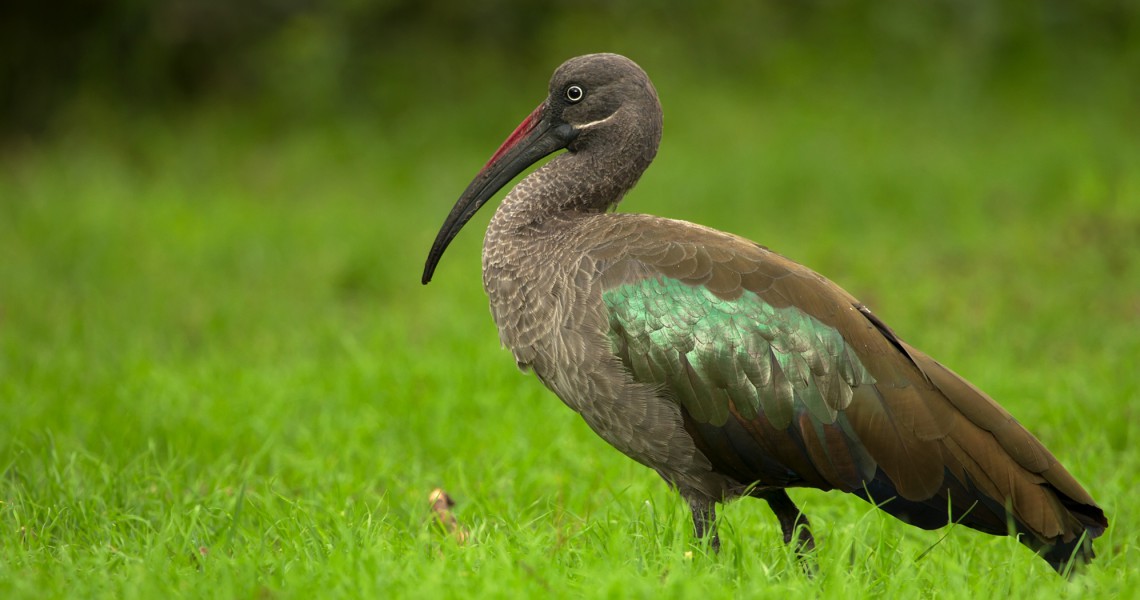 Cambodia is of global importance for the conservation of Asian vultures (White-rumped Vulture , Slender-billed Vulture and Red-headed Vulture). These same species have recently undergone dramatic declines of >97% in the Indian subcontinent leading to possible extinction.

The cause is veterinary use of the drug diclofenac, which is readily administered to sick livestock and is highly toxic to many vulture species. Fortunately this drug is not used in Cambodia. WCS maintains feeding stations or vulture restaurants in the area as a means of supporting the vulture population and conducting research. The restaurants also attract mammals, such as Jackals, Dhole and Leopards, and other birds including Greater Adjutant.

Chhep located in Preah Vihear Protected Forest one of the remotest regions of Cambodia, is a 6 hour drive from Tmatboey. 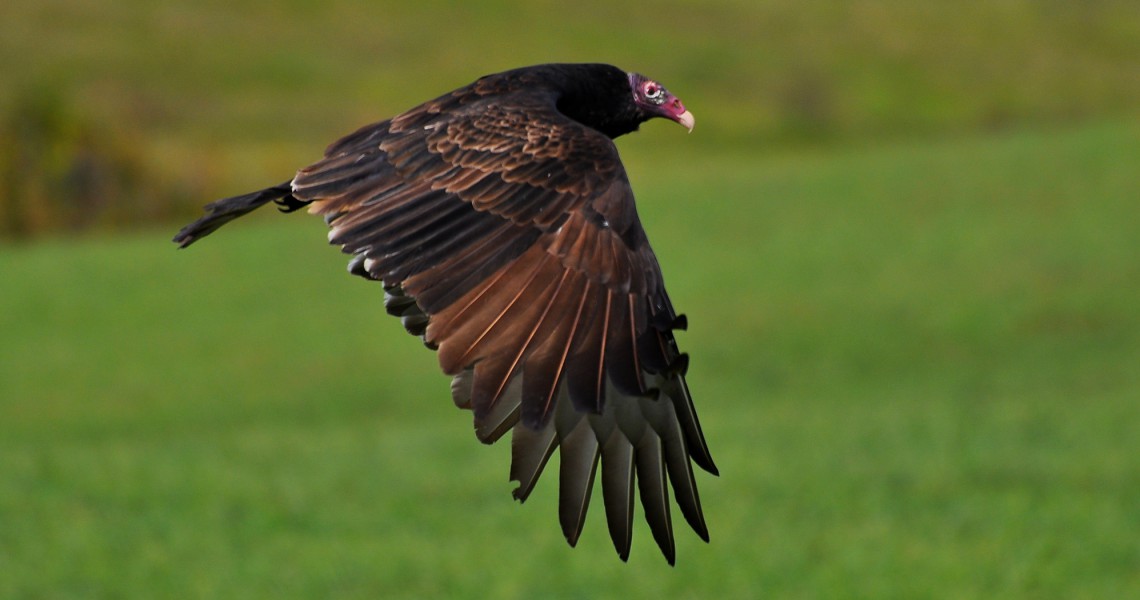 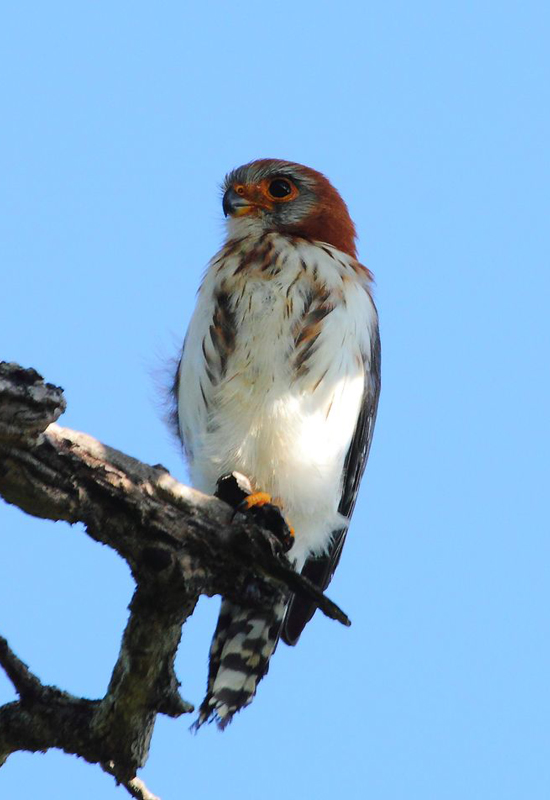 Okoki an hour and a half from Chhep offers pristine open forest landscape and opportunities for viewing the White-winged Duck as well as the forest species of birds and passing migrants seen at the other sites in Preah Vihear. Typically at least 1 night is spent at each location and preferably 2, allowing visitors to experience sunrise and sunset. At both Chhep and Okoki temporary but comfortable ‘safari style’ tented accommodation and washing facilities can be organised, a cook travels with the group.

Local guides work with the a trained visitor group guide under the strict supervision of the WCS rangers. Chhep and Okoki are only accessible during the Cambodian dry season, from December through to May.

Keo Seima town, approximately 2 ½ hours from Kratie will be the base for birding in the evergreen forest of southern Mondulkiri. One of the largest remaining blocks of Southern Annamitic forest lies in this little explored corner of Cambodia, providing a chance to see birds not encountered elsewhere in the country. Species including those more commonly associated with Vietnam such as: Germain’s Peacock-pheasant, Red-vented Barbet, Pale-headed Woodpecker, Bar-bellied and Blue-rumped Pitta, Golden-crested Myna and Grey-faced Tit-babbler. All of these are possible whilst searching for the localized, globally endangered Orange-necked Partridge in it’s favored habitat of bamboo forest.

Green Peafowl are seen regularly in the area and are sometimes observed by the main road. Evenings are the best time to see the area’s mammalian specialty, the Black-shanked Douc. Possibly more than half of the world’s population of this endangered primate are found in the SBCA. They are commonly seen in roadside trees.

2009 is the first year that tours visited SBCA. Tourist facilities are basic and still being developed in a forestry administration HQ. Bird watching is along disturbed evergreen and bamboo forest along rudimentary trails and tracks. There is a chance that elephants are in the area which may affect the itinerary. 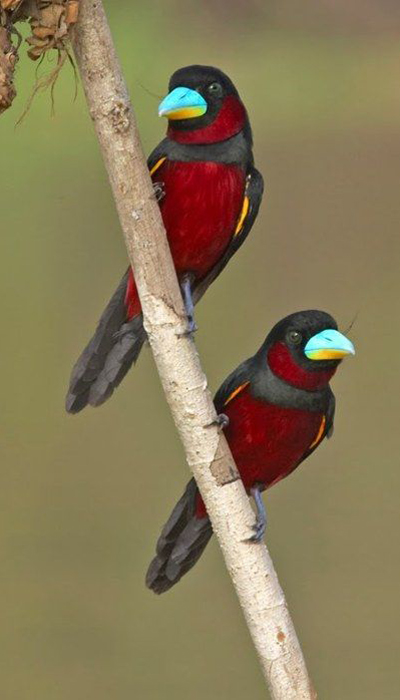 North of Kratie the Mekong River flows through riverine forest and supports a rich array of nesting birds including several species of terns, waders, swallows, large water birds and individual species such as the Pied Kingfisher and Indian Skimmer. The Mekong Wagtail, Moctacilla samveasnea, honouring the Cambodian pioneer naturalist after whom the centre is named, is present in low numbers all along the river. The visit to Kratie always includes a boat trip to see the endangered Irrawaddy Dolphin.

BOKHOR Bokhor National Park on the Southern coast of Cambodia with evergreen dwelling species in the forested slopes of the mountain. The Chestnut headed Partridge, the key attraction is found on the plateau reached on foot.

AROUND SIEM REAP Other bird watching trips in the countryside around Siem Reap can be organised. Birding can be combined with a visit to the temples of Angkor Wat in the forested Angkor Great Park. Wat Chedai on the Tonle Sap floodplain offers an opportunity for seeing water birds as well those living off village cultivation such as the Baya Weaver. Further a field we organise day trips to Phnom Khulen, a small national park North of Siem Reap still covered in original forest.

ACCB (Angkor Centre for Conservation of Biodiversity) is situated in an open area of disturbed forest which can yield a bird list of 40 species associated with the dry dipteropcarp forest in a few hours. ACCB confiscated animals from the wildlife trade are nursed back to health and kept safe from poachers is situated at the entrance to Kbal Spean where many beautiful Angkorian reliefs including the famous ‘lingas’ have been carved into the river bed in a fabulous jungle setting. Banteay Srey temple can be visited on route. Heading East the temples of Beng Melea and Koh Ker can be combined with bird watching in the deciduous forest that surrounds them.